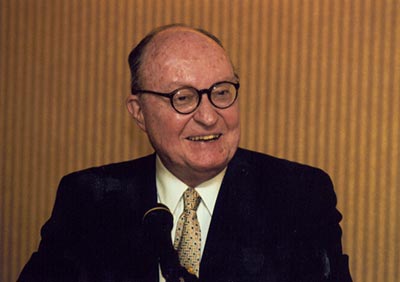 Current and former Trustees and staff of the Securities and Exchange Commission Historical Society are greatly saddened by the loss on February 15 of one of the organization's three founders, David S. Ruder. "David was a well-respected Chairman and a loyal supporter of the SEC and this organization," recalls Roberta Karmel, former SEC Commissioner and current Society Trustee.

After an illustrious career as dean of Northwestern University School of Law from 1977 to 1985 and service as Chairman of the U.S. Securities and Exchange Commission from 1987 to 1989, David was asked by then-SEC Chairman Arthur Levitt to explore establishing an organization, modeled on the Supreme Court Historical Society, to preserve the history of the SEC.

Accepting the challenge, David then recruited Paul Gonson and Harvey L. Pitt to play significant roles in helping him bring the idea to fruition. The new entity - the Securities and Exchange Commission Historical Society -- was incorporated on September 9, 1999, and on February 25, 1999 an organizational meeting was held to confirm Ruder as the Society's first Chairman, Pitt as its first President, and Gonson as its first Secretary/Treasurer. A week later, the Society received its 501 (c) (3) non-profit designation on March 1, 2000.

About his colleague, Harvey Pitt reflected that, "David was a great and brilliant SEC Chairman, but far more importantly, he cared deeply about the SEC's people and its mission, always putting them and the Agency first. His devotion to the historical underpinnings of the Commission led him to organize the SEC Historical Society, and he imbued it with the sound foundation it enjoys today. David was unique, and he will be sorely missed."

Society co-founder Paul Gonson recalls that "David was a tough minded yet affable SEC Chairman whom everyone liked and the ideal SEC Historical Society Chairman who helped guide the Society to its prominent position today. He will be long and fondly remembered."

David and his co-founders established the Society's mission to share, preserve and advance knowledge of the history of financial regulation, accomplished by continuously growing its free, on-line museum of themed galleries, exhibits, oral histories and programs featuring experts in corporate governance, financial accounting, market structure, investment management, compliance, enforcement and all other areas of the SEC's jurisdiction (www.sechistorical.org).

In the words of Dan Goelzer, former SEC General Counsel and Society Chairman who worked closely with him in both organizations, "David leaves legacies in so many areas. He led the SEC ably, including during the challenging market turbulence of October 1987. He was an author and scholar of the first order. He taught generations of securities law students and was the moving force behind several of the premier continuing education programs for practicing lawyers. In addition to helping found the SEC Historical Society, he played a key role in creating the Mutual Fund Directors Forum. For me on a personal level, he was a colleague, a mentor, and a dear friend. Like many others, I will miss him deeply."

Since David's tenure as the first Chairman of the Society, the organization has continued to thrive under the leadership of other dedicated volunteer Trustees from the public securities sector. On behalf of fellow Trustees, Society Chairman Tom Gorman stated that, "On June 2, 2019, the Society commemorated its 20 th year anniversary, and we were lucky to have David join us as we paid tribute to the organization's three co-founders. We will forever honor and thank David for his loyal and steadfast service and support, and we send our heartfelt condolences to his family for their loss."

In Memory of David Ruder

On March 20, 2021, approximately one year after his passing, David Ruder’s family and Northwestern University held a celebration of David’s life. Due to the COVID-19 pandemic, the event was conducted via webcast, and featured speakers who worked closely with David at Northwestern and the U.S. Securities and Exchange Commission. The Ruder family has graciously allowed the Society to place the video recording in the virtual museum and archive. Watch it here.

Highlights from the Museum and Archive

With with Daniel Goelzer
Video: 42:12

In this interview, David Ruder talks with Daniel Goelzer about his role as the SEC Historical Society’s founding Chairman of the Board of Trustee. Working closely with Paul Gonson and Harvey Pitt, he describes the key challenges and successes in getting the non-profit organization off the ground, including a major issues conference which proved to be an important example of both. As it turns out, Northwestern Pritzker School of Law figured significantly in early viability of the fledgling organization.