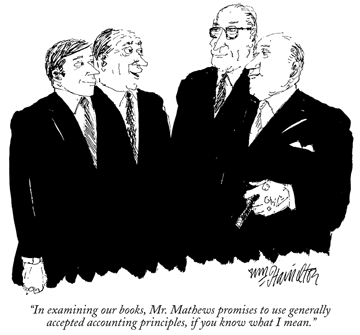 This Gallery reviews the unlikely coupling in the 1930s of a new regulator — the U.S. Securities and Exchange Commission (SEC) — and a relatively young accounting profession, to develop authoritative accounting standards. The regulator had the statutory authority to set standards, but not the resources. The SEC decided to look to the private sector for the leg work, but with oversight and occasional prodding.

The drafters of the Securities Act of 1933 initially thought little about independent audits — much less accounting principles — with drafts calling for audits only if there appeared to be doubt about the statements filed with the agency administering the law. Later, they considered at length both the value to investors of independent audits and whether audits should be made instead by government employees.

Colonel Carter was apparently the only representative of the organized profession to testify before the Senate committee and is among those recognized as having most influenced the committee to incorporate into the final bill a requirement for audits by independent public accountants. (2) He and the American Institute of Accountants had pointed out to the committee that many securities issuers, including almost all companies listed on the New York Stock Exchange, were already being audited by independent accountants. As to who should perform audits, Colonel Carter insisted to the committee that "the public accountant is better equipped to do [auditing] than the average government agency..." (3)

So, ready or not, the securities laws made independent audits and public accountants integral to the financial statements filed with the SEC. And, because the development of authoritative generally accepted accounting principles (GAAP) standards was embryonic, the SEC and the public accountants soon began a long collaborative effort to establish definitive accounting standards.

(1) March 1978 The Securities Acts and Independent Auditors: What Did Congress Intend?

(3) John L. Carey, The Rise of the Accounting Profession, From Technician to Professional — 1896-1936 (American Institute of Certified Public Accountants, 1969).