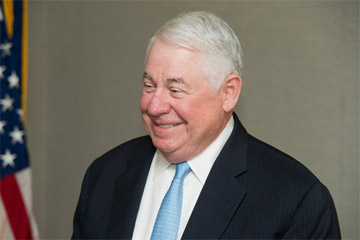 This Gallery was made possible through the generous support of Richard C. Adkerson and the Freeport-McMoRan Copper & Gold Foundation.

Richard C. Adkerson is President and Chief Executive Officer of Freeport-McMoRan Copper & Gold, Inc. (FCX).  FCX, with headquarters in Phoenix, is the world’s largest publicly-owned copper producer and principal supplier of copper to the United States.  He is also Co-Chairman of McMoRan Exploration Co., a New York Stock Exchange company engaged in oil and gas exploration and production offshore and onshore in the Gulf of Mexico region.

Mr. Adkerson is a graduate of Mississippi State University.  Prior to joining Freeport-McMoRan in 1989, he was partner and managing director in Arthur Andersen & Co., where he headed the firm’s worldwide oil and gas industry practice.  From 1976 to 1978, he was a professional accounting fellow with the U.S. Securities and Exchange Commission.

The Gallery was prepared and built by Carla Rosati.

George Fritz thanks the following for their contributions to the development of the Gallery: J.T. Ball; the staffs of the libraries of the American Institute of Certified Public Accountants, the Financial Accounting Standards Board and the University of Mississippi; and the members of the 2012-13 Museum Committee: Jackson Day, Ernst & Young LLP; Arthur Laby, Rutgers University; David Martin, Covington & Burling LLP Chair; James McKinney, University of Maryland; Richard Rowe, Proskauer Rose LLP; Eric Roiter, Boston University; and Erik Sirri, Babson College.